With the Fenty x Puma rage at its peak right now, it’s undeniable that faux fur has successfully made its comeback. While some people may deem it tacky, i think it’s adorable (when worn in a non-adorable, ironic way and not in a pedophile-bait  kind of way). While i haven’t gotten my hands on the gorgeous slides just yet there are plenty of other ways that you can incorporate a hint of faux fur into your day to day street wear, even if you live in Brunei.

Or you could just screw it and go full on Macklemore. The world is yours, honey

During my last trip to Jakarta, on the very last night, my friend Muiz and I spotted backpacks for sale in Stradivarius. They were placed altogether on a rack upfront at the entrance of the store; the ultimate sign of a serious sale, am i right? Having spent most of our money on umm, overpriced merchandise at the rave earlier, we were near piss broke at the end of our trip. Our sensible friend had left a few days before, leaving us to our own devices and being the big spenders and bad savers that we are, it really wasn’t the best idea to say the least.

We spotted the backpacks and before we knew it, we were the proud owners of matching furry backpacks that any six year old would be proud to call theirs.

P.s. Excuse our dripping jackets and damp hair, you probably can’t tell but it was an extremely gloomy day and it was absolutely pouring while we were taking these photos! 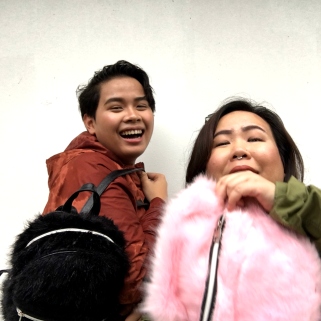 We marched out of the store just as it was closing, simultaneously emptying our wallets of any cash. Not a care in the world, just a quick detour to the ATM and then we’d be on our way… right?

All our hopes and dreams stored into that teeny tiny card weighing all about 6 grams and measuring around 3×2 inches wide… just vanished into thin air the moment it got swallowed into a black hole approximately six and a half minutes later.

So there we were stranded in a closing mall, trying to keep it together amidst slamming gates and excited home bound mall employees.  With no cash or card, our hopes and dreams of having a wild last night out before heading back to the Abode of Peace went down the drain. No amount of kicking or button punching or swearing or begging could convince the hardened contraption to yield its catch.

And take our broke asses home we did.

Needless to say, it was a very miserable and depressing cab ride back to the hotel. Instead of getting dressed to the nines, we got dressed in our pajamas, got into bed and wallowed in self-pity and misery. It was too late to ask for a transfer from Brunei because it was near midnight but definitely way too early for a night in.

But if there’s one thing we didn’t regret, even for a second, it was our adorable furry backpacks.

Look at how adorable they are! Just napping under a tree like nobody’s business gahhh

A legit conversation that took place that night during our pity party:

S: Eugh it’s all these stupid backpacks’ fault! If we didn’t buy them, we’d be out right now having the time of our lives!

S: ME TOO I’M NOT EVEN MAD AT IT *sobs* IT’S JUST TOO ADORABLE I WOULDN’T EXCHANGE IT FOR THE WORLD

Both of us: *cries dramatically together while hugging our stupid furry backpacks*

If wearing what may resemble the remains of a dead animal doesn’t appeal to you just yet, try taking it slow.While i wouldn’t completely recommend donning a full on fur coat in this suffocating heat (although you’d be surprised by our perseverance when it comes to sticking to our #sweaterweather gear. Way to stick it to the man!), baby steps go a long way with this trend. Here are some cuteass accessories you can incorporate into your daily aesthetic: 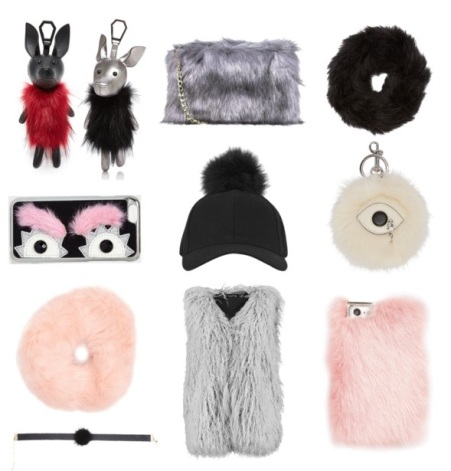 Forever 21 hair accessory (Not a furry rabbit’s arse but a hair scrunchie. I hear those things are due a comeback soon?)

(Big bad brows are so in right now. But if you’re like me and your brows are on strike from all the shaving and plucking they’ve endured over the years, then it’s perfectly acceptable to just wear them on your phone.)

Steve Madden leather shawl (No idea why Steve Madden is trying to redefine the meaning of “shawl” here. It’s a choker, y’guys.)

Til next week!
XX,
SS

I just got back from a trip to Jakarta and i don’t want to be one of those people who endlessly talk about their vacations to other people who secretly want to punch them in the face for it but i have to say, it was liit. I went there with two other friends to attend the Djakarta Warehouse Project and eventhough, i still don’t know how Hardwell, DJ Snake, Zedd or Martin Garrix look like, i can at least say i danced to the point of dehydration to their beats. I also got tipsy and fell backwards on my ass while getting frisked by security but that’s another story.

Style-wise, i want to say i surprised myself just a little bit this trip. I brought two boots with me, both taking up at least two kgs in my suitcase, none of which i ended up wearing because: a) My knee-high lace-ups made me look like a hooker and b) the biker booties made me look…like a biker. Idek, don’t you just hate it when your outfits look way better in your head than it does in real life? And then you wear it and you look like a pumpkin.

In the end, i ended up wearing my white high-top sneakers 95% of entire trip, which was unexpected tbh because i’m really not a sneakers kinda gal, much less when i’m in Jakarta. But then again it made sense because there was no way in hell i was going to wear either of the boots into a mall. Like, if i already look like a hooker wearing the boots during a rave, can you just imagine me clomping around the mall in them?

Hurried #ootn for the first night of DWP, after a three-hour flight delay and an immigration scare. I don’t think any of us even really planned our outfits for the night. All we knew was that we’d wasted enough time during the day. We didn’t even have dinner ffs #neardeathexperience

Funny story: Because all the shoes that i’d brought with me were so chunky and because i was so tired of wearing sneakers and we had no time to go shopping during the first few days, i ended up borrowing a pair of matte black jelly flats from my friend at one point. And eventhough i knew in the back of my mind that they were hideous AF, i somehow managed to convince myself, in the name of convenience and extreme hunger, that i looked alright enough to leave the hotel.

Literally me at Grand Indonesia. Hunger will make you do bad things.

It wasn’t until i was walking around the mall surrounded by all the glamorous socialites that i suddenly caught my reflection in a display window and realized how freaking hideous they were. I apologize in advance to the owner of the shoes who was so kind to lend them to me (I  love you, S!), but they legit looked like gardening shoes. Like, does this hoe look like i’m into gardening?! DO I LOOK LIKE A GARDENING HOE TO YOU. And to my friends who allowed me to walk beside them the entire time and even assured me that i looked cute, i don’t know if i should hug them or strangle them for being so nice/cruel.

Me, during dinner, trying to ignore the fact that i’m wearing lacerated industrial-sized condoms on my feet

I also ended up wearing bomber jackets a lot during the trip. I had a really bad cold within the first three days of our trip (probably something to do with repeatedly swimming in an ice-cold pool in the wee drunken hours of the morning). Plus, there’s also something about Indonesia that makes you feel not-stupid about wearing thick jackets out in the open, no matter if it’s leather or wool or whatever. It probably has to do with the locals’ strong, adamant belief of getting “masuk angin” (like, my boyfriend is Chindonesian and ohho, you do not want to argue with him about being “masuk angin”. It’s kind of how my dad’s answer to everything is to “drink more water” and “sleep early”. I could be all,

“Demsie, i have a headache”.

“Demsie, i fell down just now”.

“Demsie, i finished all my money”.

So that’s how i ended up wearing bomber jackets a lot during the trip. Usually, to be completely honest, i steer clear away from structured jackets whenever possible, which is ironic, because i’m such a fan of cardigans. But cardigans are like the kind of comfortable aunties at a family gathering who give you sweets and share their desserts with you and who wink at you conspiratorially when telling dirty anecdotes… while structured jackets are more like the first cousin who’s just fully transitioned into puberty and refuses to acknowledge your presence eventhough you’ve known them since they were barely out of their mom’s vajayjays.

Cardigans make you feel good about yourself and make your arms feel loved and free while structured jackets, like those cousins, only make you feel cool when you’re holding a cigarette and bobbing your head to Foster The People or whatever mainstream non-mainstream band is hot right now with fifteen year olds, and are basically good for nothing else.

Jeez would it kill me to smile a little?

Pro-tip for busty, curvy girls who can’t find bomber jackets their size in the women’s seciton: Go to the men’s! They look exactly the same but feel 100% more comfortable. And, you can even move your arms! *gasp* Thanks for the suggestion, M!

I even wore a few crop tops this trip. I mean, i’m no stranger to “accidental” crop tops which is where you wear normal t-shirts, have a big lunch and then realize that your shirt suddenly lacks enough material to cover your food baby. But actual intentional crop tops, i usually try to stay away from. Until I realized that i don’t have to show my belly button to rock the midriff trend. I can just show a tiny sliver of skin from that area and still feel like a sexy Spice Girl. Anyway, belly buttons are icky (what do you even do with them? Clean them? Put an alcohol-soaked cotton swab to them? Play with them? Stuff them? Just eugh yuck).

Thanks for reading! And eventhough i am a total G R I N C H when it comes to festivities, merry Christmas and have a happy new year in advance ❤